During their life, plants constantly renew themselves. They sprout new leaves in the spring and shed them in the fall. No longer needed, damaged or dead organs such as blossoms and leaves are also cast off by a process known as abscission. By doing so, plants conserve energy and prepare for the next step in their life cycle. But how does a plant know when it is the right time to get rid of unnecessary organs? Researchers from the University of Geneva (UNIGE) and the University of Oslo (UiO) now shed light on this process. It is regulated by receptor proteins located at the surface of specific cells that form a layer around the future break point. When it is time to shed an organ, a small hormone binds to this membrane receptor and, together with a helper protein, the abscission process is initiated. Their findings are now published in the journal eLife.

"It was already known that the membrane receptor protein HAESA and a small peptide -a short chain of amino acids - hormone called IDA are involved in the same signaling pathway and, together, control the shedding of floral organs. So far, however, the mechanism underlying their interaction was poorly understood", explaind Michael Hothorn, professor at the Department of Botany and Plant Biology of the Faculty of Science of UNIGE. By solving the crystal structure of HAESA (from the Greek 'to shed') in complex with IDA, Hothorn and his team found out that the receptor directly senses the peptide hormone. They observed that HAESA contains a small cleft into which IDA fits perfectly. However, it only binds halfway to the receptor. To fully initiate the abscission process, another player is needed: the helper protein SERK1. IDA then works like a double-sided Scotch tape that tethers the entire complex together. The binding of SERK1 to HAESA and IDA triggers the molecular switch that instructs the cell to shed the organ.

"The fascinating thing about SERK1 is that it not only plays a role in the shedding mechanism of plant organs, but also acts together with other membrane receptors that regulate totally different aspects of plant development", says Julia Santiago, first author of the study. Indeed, SERK1 is a versatile helper protein shared between different signaling pathways. When bound to another protein receptor, it can also for example signal the plant to grow.

To verify their findings, the biologists from UNIGE collaborated with Melinka Butenko's group from UiO. By studying genetically modified Arabidopsis thaliana plants, the Norwegian researchers confirmed the role of SERK1 in plant organ shedding. Their data were then statistically analyzed by professor Ludwig Hot-horn from the Leibniz University Hannover.

Now that they found out what is going on at the surface of plant cells before organ shedding, Michael Hothorn and his team want to discover what happens inside the cell. " How exactly the molecular switch for abscission works is still largely unknown", explains Michael Hothorn. 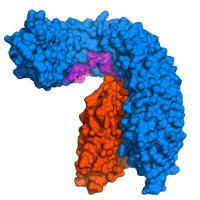