Cold Spring Harbor, NY - Structural biologists at Cold Spring Harbor Laboratory (CSHL) and Janelia Research Campus/HHMI, have obtained snapshots of the activation of an important type of brain-cell receptor. Dysfunction of the receptor has been implicated in a range of neurological illnesses, including Alzheimer's disease, Parkinson's disease, depression, seizure, schizophrenia, autism, and injuries related to stroke.

NMDA receptors are embedded in the membrane of many nerve cells in the brain and are involved in signaling between cells that is essential to basic brain functions, including learning and memory formation.

Structurally, the NMDA receptor is made up of various protein segments, called domains, which together resemble a hot air balloon. The upper, balloon-like portion is comprised of the amino terminal domain (ATD); protruding from the outer surface of the cell is the ligand binding domain (LBD); and the lower, basket-like portion of the receptor, called the transmembrane domain (TMD), drops down inside the cell.

Activation of the NMDA receptor requires binding of brain chemicals called neurotransmitters at specific sites on the LBD. This binding together with structural rearrangement of the ATD triggers the opening of the channel formed by the TMD. This molecular event causes charged atoms called ions flow into the cell. When this occurs in many channels at once, an electrical current is generated that rapidly propagates through the neuron and triggers the release of neurotransmitters. These chemical signals, in turn, bind to receptors on neighboring cells.

Despite accumulating knowledge regarding the structure of the NMDA receptor and its various components, precise, details about the structural movements leading to the process of opening of the ion channel have not been described previously and the mechanism of receptor activation has remained unclear.

In addition to describing the NMDA receptor's balloon-like structure, Furukawa and the team of CSHL structural biologists have previously revealed many important features of NMDA receptors, including the distinctive ways in which a number of drug compounds attach to the receptor at its various binding sites. "The NMDA receptor architecture itself is quite complicated," says Furukawa, "but most recently we've been really fascinated by how each of its domains moves in a sophisticated but organized manner."

To learn more about the dynamics of NMDA receptor activation, the researchers combined two molecular imaging techniques, x-ray crystallography and single-particle electron cryomicroscopy, and observed structures of the NMDA receptor in three specific configurations, the activated, non-active, and inhibited states.

Each of these configurations was achieved by the binding of different molecules to the receptor. For example, the activated state required the binding of the neurotransmitters glycine and glutamate, while the binding of the compound ifenprodil resulted in the inhibited state that forces the channel to be closed. The researchers used these molecular structures, published today in Nature, to infer how the receptor's various subdomains rearrange themselves when transitioning from a non-active to the active state.

"With the technology available today, we don't see continuous movement but instead we see snapshots of NMDA receptors in different functional states," Furukawa notes.

Superimposing the crystal structure of the NMDA receptor in each of the three functional states revealed which components move -- typically by rotating slightly relative to one another -- when the ion channel opens. The researchers observed that activation required opening of the bi-lobed architecture of the one of the two ATD subdomains and a reorientation of the ATD as a whole. These changes lead to additional rotations at various points throughout both the ATD and LBD, causing the ion channel pore to open, similar to the opening of a camera shutter.

Furukawa says that studying how components of the NMDA receptor move during activation and inactivation can help scientists create computer simulations to predict how the structures of various drug molecules might impact these movements. "Unless we have a library of molecular structures, people in the field won't be able to run those simulations," says Furukawa. "We hope that this new finding will help pharmacologists come up with better therapeutic compounds that have minimal side effects."

The research described in the release was supported by the National Institutes of Health, the Stanley Institute of Cognitive Genomics, the Japan Society for the Promotion of Science, a Burroughs Wellcome Fund Collaborative Research Travel Grant, the Robertson Research Fund of Cold Spring Harbor Laboratory, and the Visiting Scientist program of the Janelia Research Campus.

"Activation of NMDA receptors and the mechanism of inhibition by ifenprodil," appears online May 2, 2016 in Nature. The authors are Nami Tajima, Erkan Karakas, Timothy Grant, Noriko Simorowski, Ruben Diaz-Avalos, Nikolaus Grigorieff, and Hiro Furukawa. The paper can be viewed at http://www.nature.com/nature/index.html

Founded in 1890, Cold Spring Harbor Laboratory has shaped contemporary biomedical research and education with programs in cancer, neuroscience, plant biology and quantitative biology. Home to eight Nobel Prize winners, the private, not-for-profit Laboratory employs 1,100 people including 600 scientists, students and technicians. The Meetings & Courses Program hosts more than 12,000 scientists from around the world each year on its campuses in Long Island and in Suzhou, China. The Laboratory's education arm also includes an academic publishing house, a graduate school and programs for middle and high school students and teachers. For more information, visit http://www.cshl.edu. 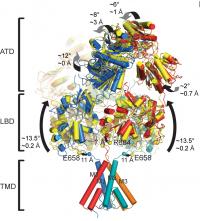